The images below are from the
FLORENTINE CODEX*
take a good look at the instrument being played
is it gourd?
clay?
metal or ?
are there fingerholes in the instrument or is that just the way it is being held?

The following image is from the Florentine Codex,
this is the first time it appears
on the internet as a stand alone image.
for info on gourd trumpets please see
GOURD TRUMPETS MEXICA


*
November 2012, the world was given a great gift
the digitized version of the FLORENTINE CODEX
was uploaded complete for the first time, which means
that you no longer need to be a scholar, fly to Florence, Italy
and request time to study the manuscript.
http://www.wdl.org/en/item/10096/ 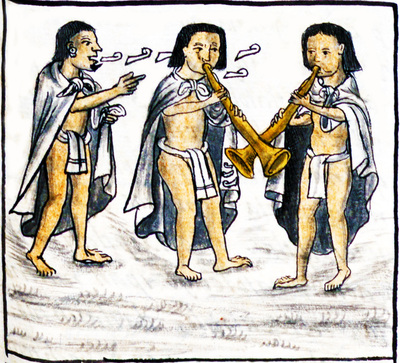 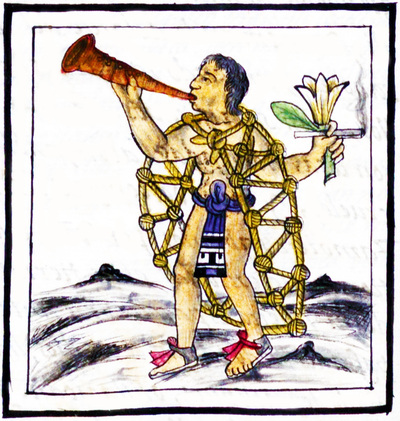 Long before friars arrived, temple musicians at Tenochtitlan were already in the habit
of calling the city to prayers at stated intervals Five times nightly and four times daily
was the rule for priests in the major temples.
FLORENTINE CODEX:BOOK2 - THE CEREMONIES,
translated Artuhr J.O. Anderson and Charles E. Dibble
(Sante Fe: School of American Research, 1951)

"Next to the temple there was a large block in which a great number of trumpeters
and drummers  lived whose duty it was to play their instruments before the pontiffs
when they sallied forth.
Also the  trumpeters had the duty of playing their truMpets as a universal call to prayer
at sunset, midnight  and daybreak At midnight the ministers in the temple rose, prayed,
bathed and incensed the idol. The common folk in their homes rose, bathed and recited
their prayers. "
DESCRIPCION DE CHOLULU REVISTA MEXICANA DE ESTUDIOS HISTORICOS,
GABRIEL DE ROJAS (NOV-DEC 1927) 162