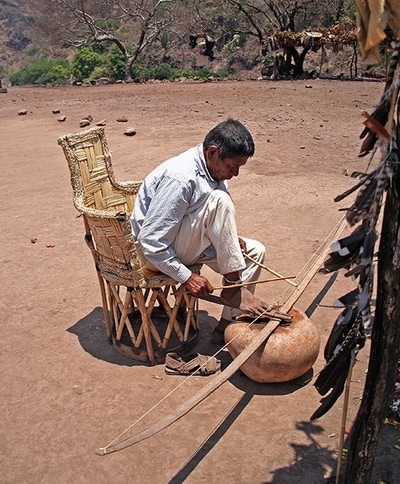 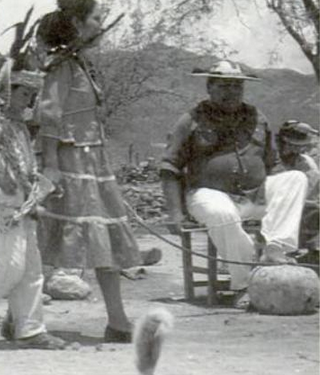 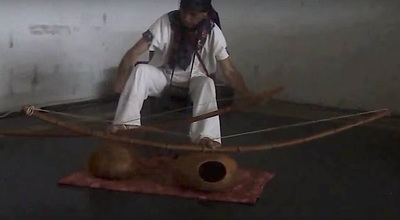 Robert Murrell Stevenson, cites Charles L. Boiles work (1932 - 1984)
Boiles cites 14 native language dictionaries with a definition for "string instruments"
which were published in Mexico during the 16th century
(see page 23) of Music in Aztec and Inca Territory  (2)
(Unfortunately he does not specify which indigenous dictionaries these appear in)

Is it possible that such an instrument existed and we have yet to find a record?

We have to remember that even though images have not been found in the Codices that we can still investigate murals, pottery and sculptures and new discoveries continue daily.
​ 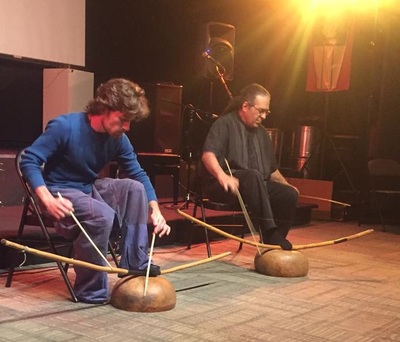 TAWITOL (4)
THE MUSICAL BOW
FROM THE TEPEHUANOS
*LUMHOLTZ writes,
"As we entered on the plain we could distinctly hear the beating of the tāwitól, the musical instrument of the Tepehuanes. At this distance it sounded like a big drum. Strange to say, the shaman was a Tepehuane. I learned later that the Aztecs consider the shamans of that tribe better than their own. In front of the shaman was the musical instrument on which he had been playing. This was a large, round gourd, on top of which a bow of unusual size was placed with its back down. The shaman's right foot rested on a board which holds the bow in place on the gourd. The bow being made taut, the shaman beats the string with two sticks, in a short, rhythmical measure of one long and two short beats. When heard nearby, the sonorousness of the sound reminds one of the cello.

"This is the musical bow of America, which is here met with for the first time. It is intimately connected with the religious rites of this tribe, as well as with those of the Coras and the Huichols, the latter playing it with two arrows. The assertion has been made that the musical bow is not indigenous to the Western Hemisphere, but was introduced by African slaves.

Without placing undue importance on the fact that negroes are very rarely, if at all, found in the north-western part of Mexico, it seems entirely beyond the range of possibility that a foreign implement could have become of such paramount importance in the religious system of several tribes. Moreover, this opinion is confirmed by Mr. R. B. Dixon's discovery, in 1900, of a musical bow among the Maidu Indians on the western slope of the Sierra Nevada, northeast of San Francisco, California. In the religion of that tribe also this bow plays an important part, and much secrecy is connected with it."

HOOL (5A) (5B) (5D)(5D)(5E)(5F)(5G)(5H)
"A PRIMITIVE MAYA MUSICAL INSTRUMENT"
Mr. M. H. Saville
"M.H. Saville described a primitive stringed instruments which he had personally encountered in the winter of 1890-1891, while exploring a cave of the Tabia hacienda in Yucatan, some Mayas from "various small villages in the interior of the country, remote from Spanish influences," introduced him to a "primitive form of stringed instrument" call a hool. This instrument was made by stretching a piece of rope-like vine called ohil, between the two ends of a pliable piece of wood, making a bow about two feet in length."
To hear a sample of the musical bow go to (5H)

"This is a percussion instrument consisting of a long wooden bow with gourd resonator beneath. An ordinary string is stretched taut and wound around the two notched ends of the bow. The bow is stretched on the gourd, which rests on the ground, the performer holds the two together his his foot, striking the string with two thin wooden sticks"
(5G)

(5A)
See page 24 of MUSIC IN AZTEC AND INCA TERRITORY

(5C)
THE MUSICAL BOW IN ANCIENT MEXICO
by Mr. M. H. Saville
is an article from American Anthropologist, Volume 11.
http://archive.org/details/jstor-658759

(5F)
THE NATURAL HISTORY OF THE MUSICAL BOW
http://books.google.com/books?id=pSQJAQAAMAAJ&pg=PA45&lpg=PA45&dq=musical+bows+mexico&source=bl&ots=XX3jQp9ZYZ&sig=eBuS6oyo8JOrevwbds_YhYba7v4&hl=en&sa=X&ei=RA_BUeSWBaeciALlooH4Dg&ved=0CGAQ6AEwCA#v=onepage&q=musical%20bows%20mexico&f=false

The Mitote is the same musical bow,
played by the Cora, Huichol, Maidu, Mayan and many others

"Ethnomusicologists study music in varying ethnic contexts. Ms. Yurchenco began by tracking down 14 all-but-unknown Mexican and Guatemalan tribes, reaching them with little but a mule and 300 pounds of recording equipment. She eventually recorded 2,000 of their songs for the Library of Congress."
New York Times obituary

Henrietta Yurchenco obituary excerpt
"Aged 21, Yurchenco and her husband travelled to some of the remotest parts of Mexico.
Using what was then state-of-art equipment - portable at a mere 200-300lb - they recorded
the sounds of native Mexican peoples, such as the Cora, Huichol, Seri, Tzotozil and Yaqui,
who had always lived cut off from mainstream society. Even now, with the possible exception
of that of the Yaqui - a people made famous through the writings of Carlos Castaneda - this
music sounds otherworldly. Yurchenco's recordings from that and later trips to Mexico and
Guatemala between 1942 and 1946 resulted in such releases as
Folk Music of Mexico (1948) for the Library of Congress and
Indian Music of Mexico (1952).
was also, in 1968, her Latin American Children's Game Songs Recorded in Puerto Rico and Mexico.
​
Her most commercially successful album was The Real Mexico (1966)."
http://www.guardian.co.uk/music/2008/feb/11/folk.mainsection

http://www.nonesuch.com/albums/mexico-the-real-mexico-in-music-and-song
check out the music of the PUREPECHA here