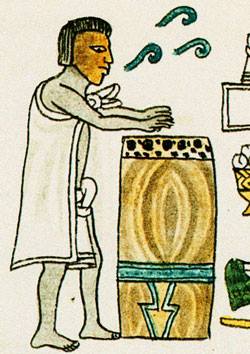 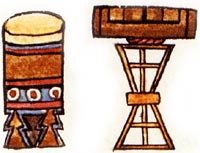 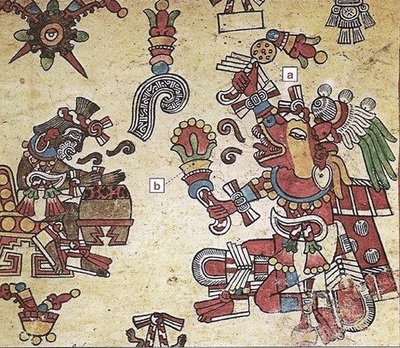 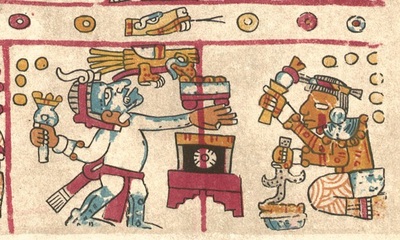 CHARACTERISTICS
usually made of wood
e.g.,
oak, walnut or ahuhuete(1)
sometimes made of clay (2)
some writings claim that there were decorative huehuetls made of gold (3)

the drumhead was a stretched animal skin
e.g.,
jaguar, deer, ocelot, which could be tuned via heat
​
it is well documented that "there were at least 2 pitches that the drum can make
usually the interval of a 5th between the edge and the center of the drum"

but this is a historians point of view,
not a musicians or ethnomusicologists

most good drummers can get more than 2 pitches out of any drum
as well as many inflections with their fingers, hands and/or sticks

"They struck them only with their fingers,
but it required infinite dexterity in the striker"
Fray Javier Clavijero
from the
HISTORIA ANTIGUA DE MEXICO

HISTORIA ANTIGUA DE MEXICO/ONLINE
http://www.ellibrototal.com/ltotal/ficha.jsp?idLibro=5006
​
Fray Javier Clavijero Biography
http://www.biografiasyvidas.com/biografia/c/clavijero.htm
1731 - 1787
It is interesting to note that the codices do not show
huehuetls being played with sticks or mallets at all, but with bare hands
and there is written documentation of as many as  10  huehuetl
players accompanying singers in ancient times. (6)
but of course, there are always exceptions (7)

the earliest known image of the MAYAN version of the drum,
Zacatan,  goes back to 790 A.D. at the MURALS OF BONAMPAK

when and did the zacatan make its way into what is now known as Mexico City???
​
Michael Coe believes that the center of MESOAMERICAN politics and policies
was centered in TEOTIHUACAN
while the oldest images of the ZACATAN AKA TLAPAN HUEHUETL comes
from THE MURALS OF BONAMPAK
the traditions may have originated from there
but as of this writing there is no documentation, murals, images etc.,
to substantiate this, but he believes that this information will come to light 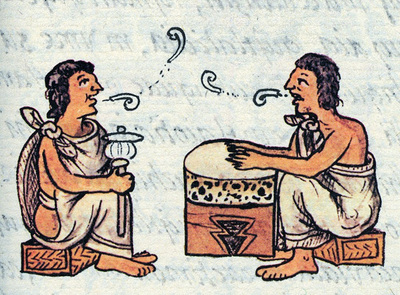 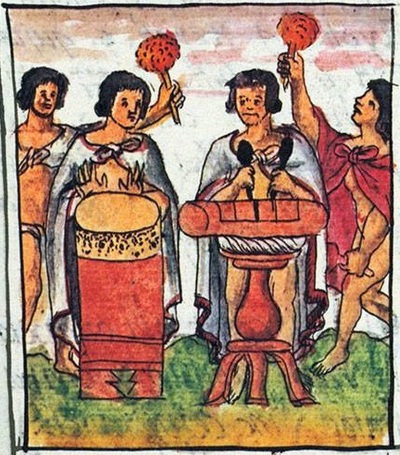 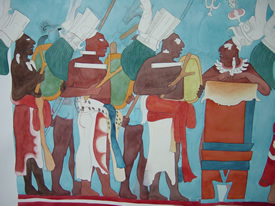 ahuehuete is also known as the "drum tree" growing beside the water (a - huehuetl)
William Gates, translator of The de la Cruz Badiano Aztec Herbal of 1552 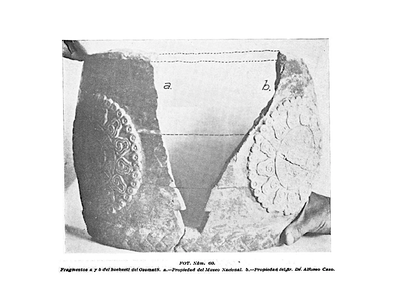 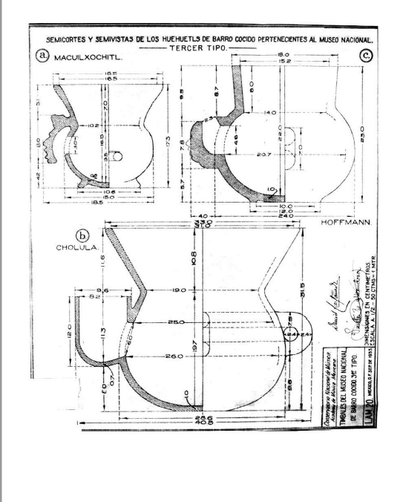 It was claimed by Aztec diviners that all Males born under this sign would be
"singers or dancers or painters or learn some desirable art"
SAHAGUN - Bk IV,chap 21(Garibay Ed., I, 349.2

it is also surrounded by 9 of the circumpolar constellations
see fig 16 after p 576
the stamp itself had been fabricated in the year 747
during the TOLTEC period.

(3)
There is a pre conquest Flower Song
(part of the Chalca Triolgy = Song XXXVb of
Cantares en idioma mexicano
(Schultze Jena ed., 182, line 15
alluded to a "huehuetl of gold"

ITZCOATL
MEXICA king 1427 - 1440
when leading his warriors into battle
"played a small huehuetl hanging from his shoulder and the sound of it excited the Mexicans to fight"
DIEGO DURAN op. cit, I = The Aztecs
translated by Doris Heyden and Fernando Horacasitas

(5)
"They struck them only with their fingers, but it required infinite dexterity in the striker"
HISTORIA ANTIGUA DE MEXICO
by Fray Javier Clavijero
​
Francisco Xavier Clavijero, S. J., o Francisco Saverio Clavigero
Puerto de Veracruz, Mexico, 9 de Septiembre, 1731 - Bolonia, Italia, 2 de Abril de 1787
​
when, how and why did this change?
when did the tradition go from hands to sticks
we may never know for sure

But it is also not found on the murals, or pottery, or drawings.
Where is it?
When did it become "tradition"?


VISIT LINK BELOW to see an image from
BOOK OF THE GODS AND RITES
and
THE ANCIENT CALENDAR
by
FRAY DIEGO DURAN
See Chapter Xii of
http://christophergarciamusic.weebly.com/ayoyotes.html 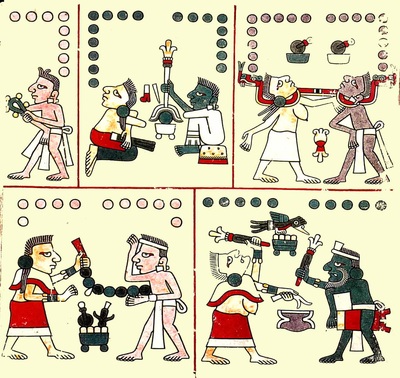 MIXTEC
CODEX VATICANUS B3773,38
and NUTALL, 73
also show 1 drummer playing a huehuetl with one hand and an ayacaxtli in the other
MAYAN 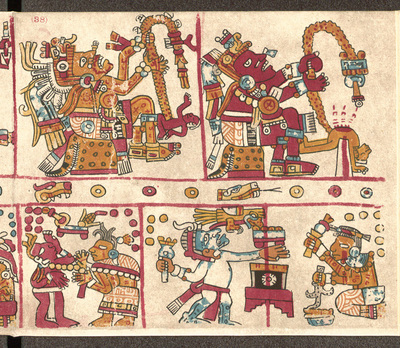 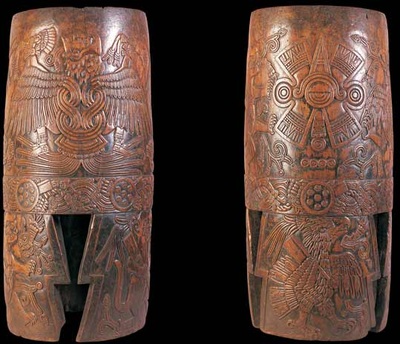 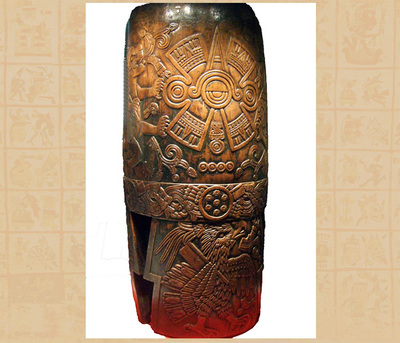 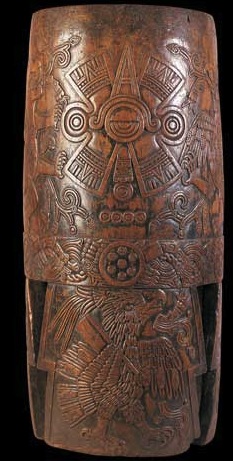 MALINALCO CARVINGS
http://www.mexicolore.co.uk/aztecs/ask-experts/did-the-aztecs-carve-eagles-and-jaguars-on-their-drums-as-messengers
ARTICLE SUBMITTED BY
Manuel Aguilar-Moreno, Ph.D. is Associate Professor of Art History at California State University in Los Angeles.
A renowned expert on pre-Columbian civilizations and the colonial history of Mexico, Dr. Aguilar-Moreno has published on a wide range of subjects, including Mesoamerican Art and History, colonial art and history of Mexico, funerary art, and the pre-Columbian ballgame.
His last books are:
Utopía de Piedra: El Arte Tequitqui de Mexico and Handbook to Life in the Aztec World.
He is co-director with Dr. James Brady of the Ulama Project of Cal State L.A.,
that is an investigational project on the Survival of the Mesoamerican ballgame.

I have seen the following images as museum exhibits, documentaries etc.,
and it continues to be used
one of the more interesting things about the DRUM OF MALINACLO is that
there are no marks on the rim on the drum in the anthropology museum
which means that the head was not affixed on to the drum with pegs, or rods
but with some type of glue,
CLICK on the image and you will see that there are no marks on the drum at all
where the head should be
if you do find an image of the MALINALCO drum with a head mounted on it
you will see that it is a REPLICA
and not the actual drum which now sits in the museum in Mexico 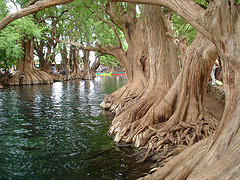 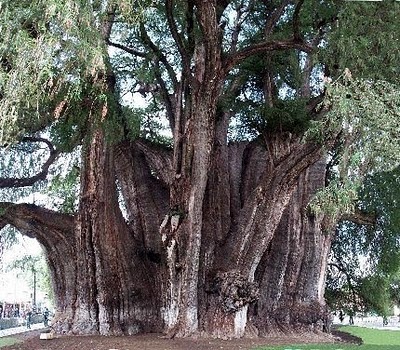 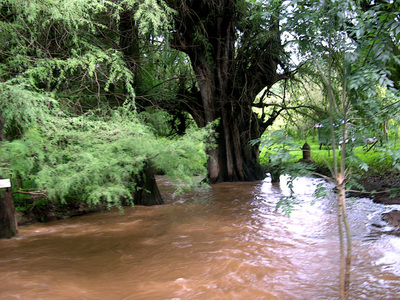 *the majority of people now pronounce it with 2 syllables

Fray Molina was the first to create the following dictionaries
SPANISH - NAHUATL DICTIONARY 1555:
and then
NAHUATL - SPANISH DICTIONARY- 1571

A Spanish account on the origin of the huehuetl and tepo as divine beings sent to earth
Mendieta came to Mexico as a youth of nineteen, and immediately
began the study of Nahuatl, which he learned to speak with signal "elegance.'

He was commissioned by his order to prepare a history of the
Indians and started the Historic Eclesidstica Indiana in 1571 ;
the pressure of missionary duties, the involvement in unforeseen administrative
responsibilities, and the interruption caused by a prolonged journey back
to Spain, delayed its completion, however, until 1596.

Mendieta tells us (b the extract offered below) that the Aztecs ascribed a divine
origin to their two most important instruments,
the teponaztli and the huehuetl.

Teponaztli and Huehuetl were originally divine beings dwelling at the court of the Sun.
A priestly messenger from earth invaded the heavenly precincts and poured forth in song
the story of man's grief.

The Sun, however, forbade his servitors to listen to the earthly messenger.
Teponaztli and Huehuetl disobeyed the Sun, and for their disobedience were
expelled from the heavens.

They fell to earth and assumed the form of musical instruments. Ever since their
expulsion from the skies they have assuaged man's grief with the sound
of their music.

This legendary account is interesting if for no other reason than because
it helps explain why the ancient Mexicans thought a magic power (having
nothing to do with music) inhered in their instruments. Since they thought
the teponaztli and huehuetl were actually divine beings temporarily condemned
to earthly exile, they treated these instruments as idols. 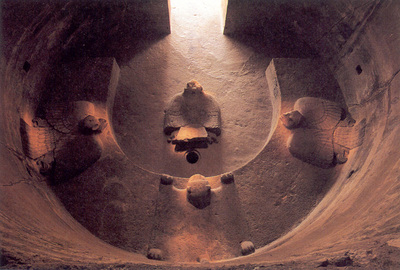 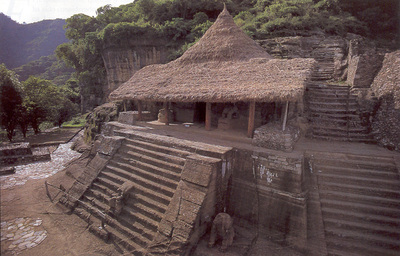 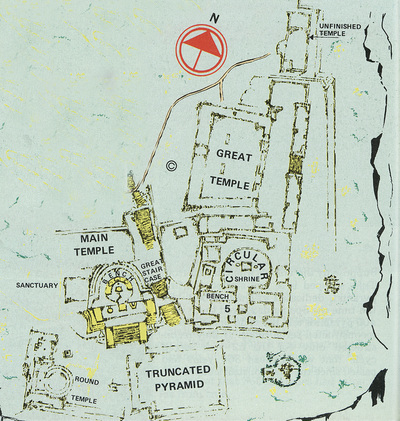 WHEN WAS THE TEPONAZTLI PLAYED

" so that no hour for prayer would pass without music in the priests dwelling (calmecac),
four professional players of quiquiztli, ayacachtli, ayotl and teponaztli were required during
ceremonies of the sixth month to remain behind while the populace gathered at the waterside
to wade and babble like ducks"
(FLORENTINE CODEX, BK ll, chap 25, Anderson and Dibble, op.cit., p 77
FROM MUSIC IN AZTEC AND INCA TERRITORY
ROBERT MURRELL STEVENSON

WHERE WAS THE TEPONAZTLI PLAYED

"stated that during their dances the Indians always sang in unison with the teponaztli tune.
He stated that the teponaztli and huehuetl players, during all the cult dance but one, were placed
where the dancers could see them, and thus better follow their beat, the one exception being a dance
honoring Huitzilopochtli "
JUAN DE TORQUEMADA