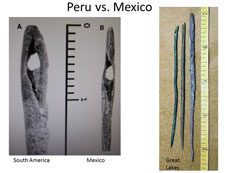 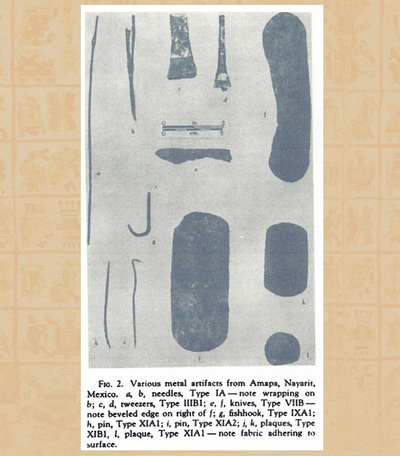 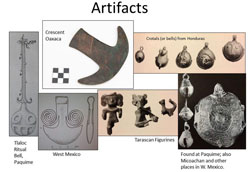 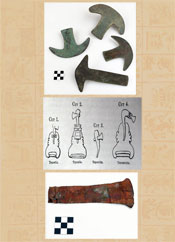 additional info on copper instruments
Pre contact copper rattles can be documented in numerous archaeological finds.
Metal trumpets are more difficult to find, but their disappearance may mean no
more than that they were melted down.

ARCHAEOLOGICAL EXPLORATIONS (1902) p 14,
pictured "thirty copper morris bells" dug up in only one day
during the sewer excavations at Mexico City, September 4 1900.
Before the digging ended, 150 had been collected.

For a unique type or Tarascan copper cascabel, tortoise shaped,
and made of soldered copper wire, see
LAS ANTIGUAS CULTURAS,
KRICKEBERG,
"No other NEW WORLD culture produce anything like it"

Recent archaeometallurgical studies at the ancient Maya site of Lamanai, Belize have begun to reveal the nature of copper metallurgy in the centuries just prior to and during Spanish contact in the Southern Maya Lowland Area. More copper artifacts have been recovered from controlled archaeological excavations at Lamanai than at any other site in the Southern Maya Lowland area. A total of 187 copper objects dating to the 12th through 16th centuries AD have been recovered; among these objects are ingots or pigs, blanks, prills and a substantial number of mis-cast objects, many of which are bells. The archaeological contexts in which copper bells, axes, needles, fish hooks, rings, and clothing ornaments have been recovered will be summarised. Forming technologies used in the creation of Maya copper artifacts as well as their chemical compositions were studied using scanning electron microscopy and optical light microscopy. The results of chemical compositional and microstructural analyses will be presented and discussed in the contexts of larger social and economic spheres that were part of the Maya world just before and during Spanish contact in Belize.
Archaeological explorations in Escalerillas street, city of Mexico 1902
https://archive.org/details/archaeologicalex00insp

*COPPER IN MESO AMERICA
the images above are from the the article below
http://www.mexicolore.co.uk/aztecs/home/mesoamerican-copper-industry-of-connections